We knew what a yurt was; we had seen the pictures and read the blurbs. But when we veered off the 101 freeway just north of Santa Barbara and began the meandering ascent along the mountainside, cliffs plunging abysmally just feet from the jeep, we started to wonder if we’d gotten in over our heads.

Then again, the whole point was to escape. To extricate ourselves from the constant din of the city. Los Angeles, with its millions of denizens and sluggish rivers of traffic branching off in every direction, had worn us thin. As foreboding as it was to make the drive up that dizzying mountain ledge, the promise of clean air and a night without helicopters trumped our doubts, and we were soon pulling up to a round, hut-shaped edifice lit up under stars.

Outside, it was frigid with ocean air, and we hurried in to get out of the dark. Once we’d crowded into the yurt, we flipped the light switches and immediately our anxiety was put to rest. We would not be roughing it this weekend. Far from it.  An earthy interior with wooden walls and accents housed an overstuffed leather couch, a collection of instruments—bongos and tambourines, and warm-toned décor from around the world. Though the cold had pushed its way past the cloth walls, we turned on all the heaters, and within an hour had shed our layers. No North Face for us.

This was the first moment we sensed that the beauty of the yurt was in its duplicity. On the one hand, only a single woven layer separated us from the near-freezing winds. We could hear as they slapped the yurt on their way past. On the other, we filled our tumblers with whiskey and spread out across the leather sofa for a game of Cards Against Humanity, Beach House crooning from an iPhone we’d plugged into the sound system. Worlds weren’t colliding—it was subtler than that; they were merging. It was seamless. 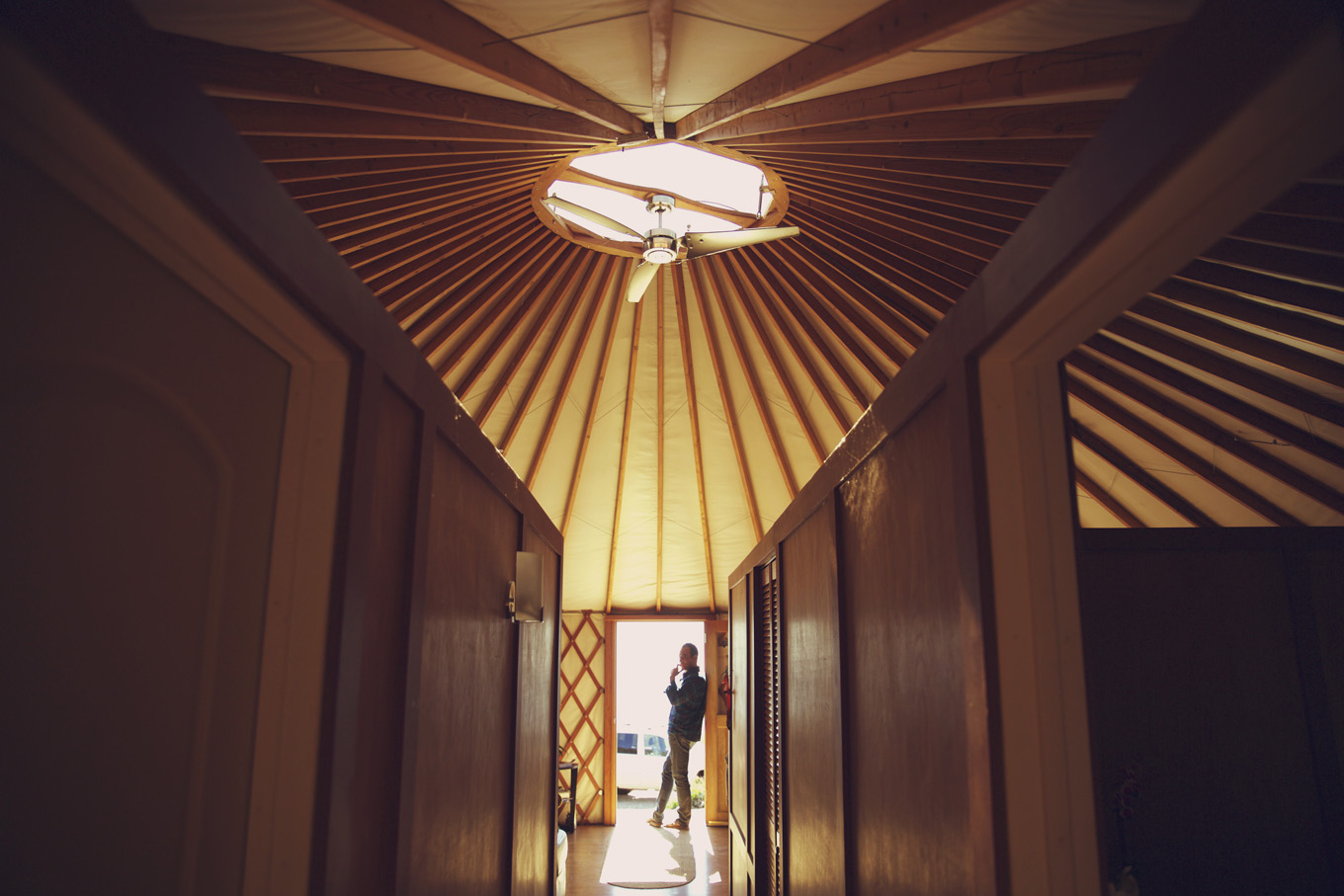 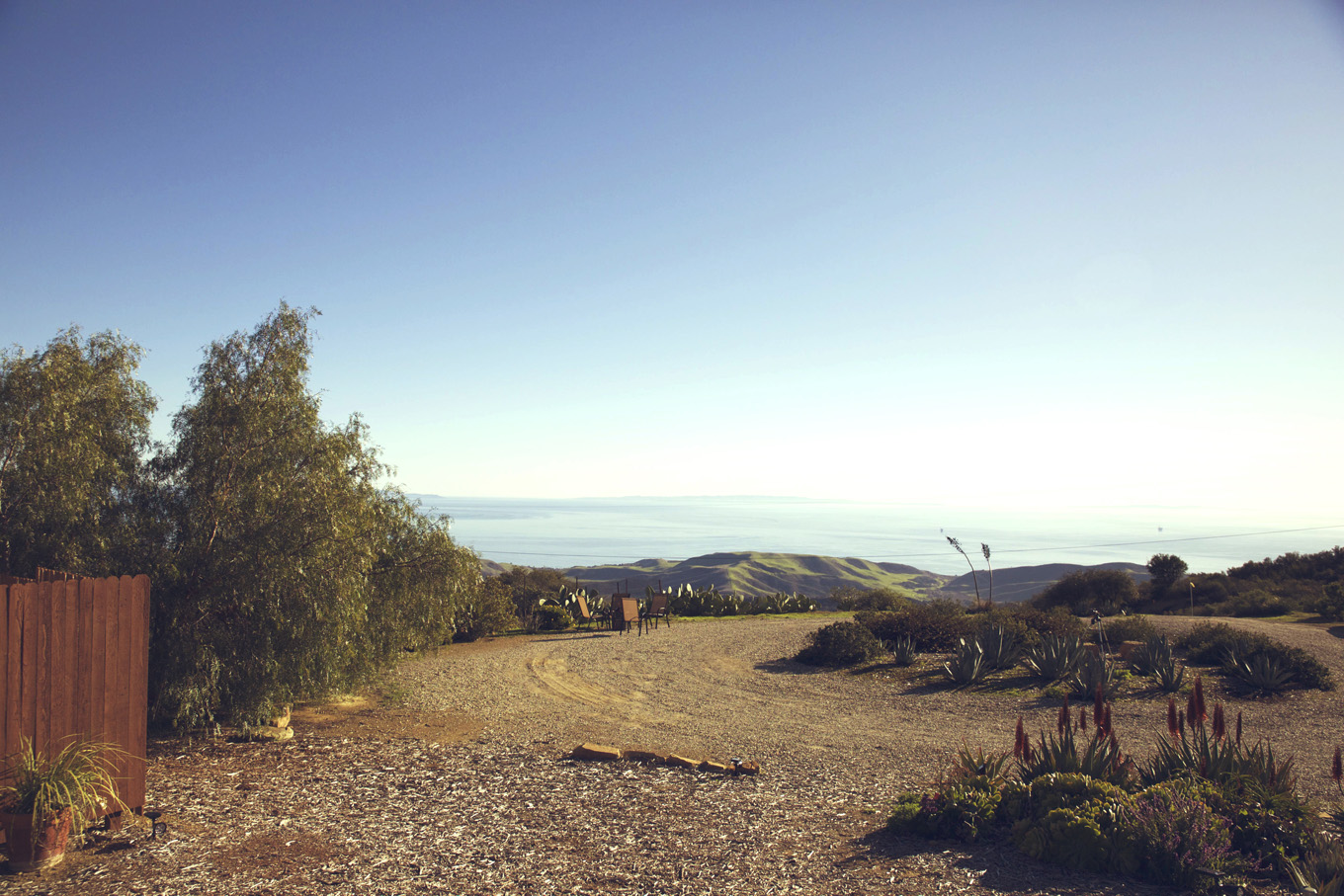 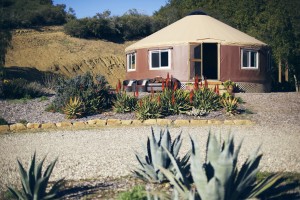 We woke in the morning to find the sun spilling through and illuminating the entire space. Without the 90-degree angles of a boxy structure to block the light, it poured in from every direction. We boiled water for the French press and scrambled a skillet of eggs to share. Outside we’d found wild sage, and we chopped it to sprinkle over slices of tomato. From the front door, sweeping views of the ocean—mountain islands peeking up from the water—stopped us in our tracks. Green rolling hills rose up from below, and the dirt road that had seemed so treacherous the night before, now trailed off languidly into a thicket of brushwood.

As we sipped coffee, mutually dumbfounded at this paradise we’d somehow ended up in overnight, we discovered a general consensus within our group that beyond the beauty of the landscape, there was something special about this place. Something we couldn’t quite put our finger on. We wanted to know more, and we knew who to ask.

A few hours later, we were sitting around the kitchen table with Adrian Larralde, the yurt’s owner and designer. With his flip-flops and bright smile, Adrian immediately put us at ease. But we soon found that beneath the exterior of good-vibes was a purposeful man who’d created the yurt out of both intention and intuition. He told us that the acreage had been in his family for 20 years. They’d fallen in love with the epic views and decided it was where they wanted to build. He’d been in several yurts before and had loved their round, open space; the sense that you were simultaneously inside and outside was like nothing he’d experienced. “It’s a really special kind of structure; it feels like it’s living.”

With that as his inspiration—bringing the elements of the outdoors into the interior—he’d made a point to include a skylight in the bathroom beside the shower and wide, spacious arches in the bedroom. Each design feature was born from a desire to incorporate the openness and buoyancy we can normally only find beyond the walls of our living space. Even the water, he told us, was meant to align the yurt’s inhabitants with nature. “We have a well here; we don’t use city water. So the water molecules are alive, not bleached or chlorinated.”

That connection to nature goes beyond mere preference, aesthetic or otherwise. It’s a continuation of the property’s ancient roots. Adrian went on to explain that for thousands of years, the Chumash had inhabited the mountain where the yurt is now perched, and that its particular location had been sacred for their medicine men. Not only because the Chumash zodiac had been developed there—the tool they used for deciphering the strengths and struggles of each member of the tribe—but also because they believed that the land straddled two worlds: the physical and the ethereal. In their lore, that very mountain was considered the gateway from this world to the afterlife. For that reason alone, the Chumash lived a peaceful, abundant existence—no other tribes would fight with the keepers of the gateway.

This powerful energy wasn’t lost on us, and to our surprise it wasn’t lost on Ronald Reagan either. During his presidency, he spent more time on the Reagan Ranch—a lot he owned just adjacent to the yurt’s—than he did in the actual White House. He was quoted as saying that the land was very special and unique, a sentiment that proved true; it was there that he brought Gorbachev to sign the peace agreement ending the Cold War.

And even today, the powerful serenity inherent in the land is central to its use. When he isn’t renting it out, Adrian uses the yurt and its surrounding space to hold The Tangle, a conscious business workshop where shamanism and entrepreneurship are interwoven. “People think of business and spirituality as separate, but if you really pay attention, they’re the same thing, “ he explained. “The workshops are powerful in that way; they’ve given me a greater sense of awareness and access to deeper listening so I can attune with synchronicities in the work I do.”

That synchronicity is no joke. Two years ago, as he was hiking alone a few miles from the yurt, he looked up to see a huge bear 15 feet in front of him. Stopping cold, he watched helplessly as the animal studied him, got down on all fours, and disappeared into brush alongside the trail. Later, he learned that a very good friend and Chumash tribesman was, at that very moment, leading the bear chant at the Santa Barbara summer solstice.

Without question, a kind of magic steers the energy on that mountaintop. A vitality we hadn’t anticipated. We’d come for a weekend getaway, something picturesque to post to Instagram. Instead we found ourselves immersed in a communion with nature and Spirit. The landscape was revitalizing—both outside and inside the parameters of the yurt. As we made our way back down the snaking dirt road, it was more than a post-vacation buzz or a good story for the office that we were taking with us. It was the realization that our experience wasn’t about extricating ourselves from the roar of technology.  It was about making an effortless connection with a greater force. A force that had been there, waiting to permeate our walls all along.